I started working on this drawing of a Nereid sarcophagus months ago; but it’s only since quarantine began that I’ve been working on it steadily, and decided to add watercolor. 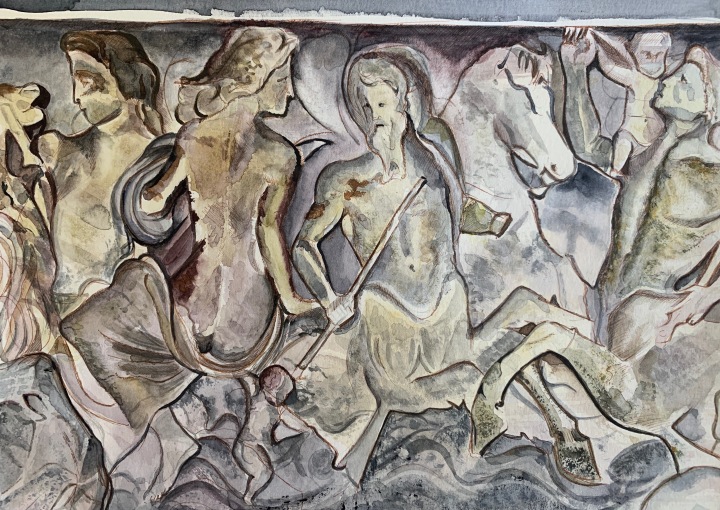 I don’t remember how I became interested in the iconography of Nereids but … somehow I did, and I found this particular image, of a sarcophagus in the Louvre, particularly haunting.

What compels me is the relationship between the Nereid and the Triton (aquatic centaur) that I’ve centered in my watercolor. The scene overall is so kinetic, chaotic—waves cresting, babies, horse, goat, dolphins and more all precariously entangled. And then, at the eye of the storm, there’s that still gaze between the Nereid and the Triton, as if they have each suddenly recognized each other in a crowd.

Their posture—the implied galloping motion of the Triton’s legs, the twist of the Nereid’s torso—suggests that this glance is fleeting, as if some witch waved her wand and turned all to stone in the split second before the Triton galloped on, the Nereid turned away, and the moment passed. And so that glancing gaze is preserved even as time’s passage is visible in the eroded marble that bleeds into the shadows thrown by the carving’s relief.